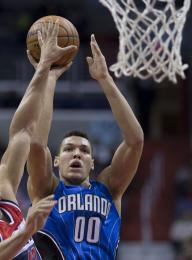 Aaron A. Gordon is a well-known professional basketball player – he hails from the United States. Gordon started playing for the popular NBA side, Orlando Magic in 2014.

His father is former, San Diego State basketball player Ed Gordon and his mother is known as Shelly Davis. His older sister, Elise played for the Harvard women’s basketball team between 2010 and 2014, while his older brother, Drew Gordon also plays professional basketball.

He started dating fellow basketball player, Dakota Gonzalez in 2017, but they broke up in September 2018.

In 2013, Gordon was named as the USA Basketball Male Athlete of the Year.

He helped Team USA win gold medals at the 2011 FIBA Americas Under-16 Championship and the 2013 FIBA Under-19 World Cup.

He won the Ed Fenelly WCAL Player of the Year Award for three consecutive years (2011-2013).

Gordon was adjudged MVP in the 2013 McDonald’s All-American Game as well as in the FIBA Under-19 World Cup.

San Jose Mercury News named him Player of the Year in 2013.

In 2018, he was featured in the sports comedy film titled, Uncle Drew.

Aaron's birthday is in 363 days

Where is Aaron from?

He was born in San Jose, California, U.S..

What is Aaron Gordon's height?

People born on September 16 fall under the Zodiac sign of Virgo, the Virgin. Aaron Gordon is the 64th most popular Virgo.

Aside from information specific to Aaron Gordon's birthday, Aaron Gordon is the 544th most famous American and ranks 1st in famous people born in San Jose, California, U.S.

In general, Aaron Gordon ranks as the 793rd most popular famous person, and the 12th most popular basketball player of all time. “The Famous Birthdays” catalogs over 40,000 famous people, everyone, from actors to actresses to singers to tiktok stars, from serial killers to chefs to scientists to youtubers and more. If you're curious to see who was born on your birthday, you can use our database to find out who, what, where, when and why. You can search by birthday, birthplace, claim to fame or any other information by typing in the search box, or simply browse our site by selecting the month, the day, the horoscope, or any other clickable option.