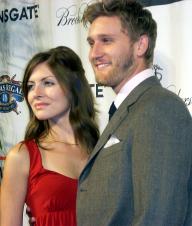 Actor Aaron Staton has risen to prominence mostly through his television work. He made his screen debut as a guest star on a 2005 episode of “Law & Order: Special Victims Unit”. Since then, he has garnered recognition through roles such as Ken Cosgrove in the period drama television series, “Mad Men”, JD in “Girlfriends’ Guide to Divorce” and Pastor in “Castle Rock”.

In 2006, he got married to Connie Fletcher. They have a son called Beckett.

He won two Screen Actors Guild Awards for his work on “Mad Men”.

He is also known for his voice acting and motion capture for the video game, “L.A. Noire”.

Aaron's birthday is in 177 days

Where is Aaron from?

He was born in Huntington, West Virginia, U.S..