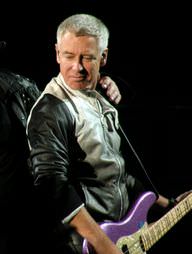 Title
Adam Clayton during a U2 concert at Scott Stadium on October 1, 2009 on the band's U2 360 Tour
Author
Source
http://commons.wikimedia.org/wiki/File:U2_@_Scott_Stadium_2_Adam_cropped.jpg
License
CC BY 2.0

Adam Clayton is an Irish bassist known to be one of the founding members of the rock collective known as U2. He started performing during his days in high school and was a member of his school’s band. He joined the U2 band, which was formerly known as "Feedback" and later "The Hype", in 1976 and has since helped them to release many albums including their debut “Boy”. With his help, the band issued their 14th album in 2017 which was under the name “Songs of Experience”.

Aside from his performances with the band, he has also worked with other artistes on many projects. He, alongside Larry Mullen Jr., worked on the soundtrack for the 1996 movie entitled “Mission: Impossible” which earned a Grammy nomination.

He was also featured on the 11th album of Nanci Griffith which was titled “Flyer”. Other artistes that he has worked with are Sharon Shannon and Robbie Robertson.

He’s one of the children of Jo and Brian Clayton. In 2013, he wedded Mariana Teixeira De Carvalho. Four years later, they mentioned that they have been blessed with a child. He has also been in a relationship with Naomi Campbell, a model, and Suzanne "Susie" Smith.

He studied at St Columba's College and was later trained at Mount Temple Comprehensive School.

As a member of the U2 band, he has won many laurels including the American Music Awards, Billboard Music Awards, Brit Awards, Grammy Awards, and Golden Globe Awards.

He was named the ambassador for the Mental Health Service of St Patrick's Hospital in 2011.

Drummer for rock band U2

Adam's birthday is in 102 days

Where is Adam from?

He was born in Chinnor, Oxfordshire, England, UK.