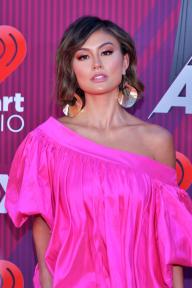 Agnez Mo is a multiple-award winning Indonesian songwriter, actress and singer who’s known for her single titled "Mr. Hologram". In addition to that, Agnez has released a series of hit songs which include "Pernikahan Dini", "Things Will Get Better", and "Coke Bottle", which she featured T.I & Timbaland.

As an actress, she has been featured in some notable movies and series such as “Pernikahan Dini”, “The Hospital”, and “Mimo Ketemu Poscha”.

Agnez has also been the judge for some renowned television talent shows including “Indonesian Idol”, “The Voice Indonesia”, and “The Voice Kids Indonesia”.

She’s known in private life as Agnes Monica Muljoto. She is the daughter of Ricky Muljoto and Jenny Siswono.

Her career has been described as successful by many critics. She’s won lots of awards including Nickelodeon Indonesia Kids' Choice Awards, World Music Awards, MTV Indonesia Awards, and Shorty Awards.

She was the recipient of a “Nugraha Bhakti Musik Indonesia” award from the Indonesian Minister of Culture and Tourism for her outstanding contribution to music in her homeland.

Agnez Mo is a famous Indonesian singer and actress, who was born on July 1, 1986. As a person born on this date, Agnez Mo is listed in our database as the 33rd most popular celebrity for the day (July 1) and the 172nd most popular for the year (1986).

People born on July 1 fall under the Zodiac sign of Cancer, the Crab. Agnez Mo is the 879th most popular Cancer.

Aside from information specific to Agnez Mo's birthday, Agnez Mo is the 5th most famous Indonesian and ranks 3rd in famous people born in Jakarta, Indonesia.

In general, Agnez Mo ranks as the 9220th most popular famous person, and the 945th most popular singer of all time. “The Famous Birthdays” catalogs over 25,000 famous people, everyone, from actors to actresses to singers to tiktok stars, from serial killers to chefs to scientists to youtubers and more. If you're curious to see who was born on your birthday, you can use our database to find out who, what, where, when and why. You can search by birthday, birthplace, claim to fame or any other information by typing in the search box, or simply browse our site by selecting the month, the day, the horoscope, or any other clickable option.