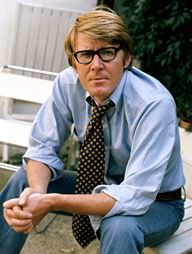 Alan Bennett worked as a university lecturer before finding fame in 1960 when he teamed up with other actors to write and perform the revue titled “Beyond the Fringe” at the Edinburgh Festival. The English filmmaker is best known for his 1991 work “The Madness of George III” which was later adapted into a film and released four three years later.

His other works include “Talking Heads” and “A Question of Attribution” which focused on Sir Anthony Blunt.

Over the years, Bennett’s popularity has increased due to his interesting books. He’s best known for his 2007 novella “The Uncommon Reader” and the 1991 book “The Wind in the Willows”.

He has also released many audiobooks on stories like “Winnie-the-Pooh” and “Alice's Adventures in Wonderland”.

His parents Lilian Mary Peel and Walter Bennett supported him at the beginning of his career. He was in a relationship with Anne Davies, but she died in 2009. Since then, he has been romantically linked with Rupert Thomas, an editor.

Before starting his education at Exeter College, Oxford, he studied at a number of institutions including Leeds Modern School, and the Joint Services School for Linguists.

In 1996, he declined an opportunity to be made a knight.

Those who have known the famous are publicly debriefed of their memories, knowing as their own dusk falls that they will only be remembered for remembering someone else.Alan Bennett

Alan's birthday is in 106 days

Where is Alan from?

He was born in Leeds, England, UK.

People born on May 9 fall under the Zodiac sign of Taurus, the Bull. Alan Bennett is the 1442nd most popular Taurus.

Aside from information specific to Alan Bennett's birthday, Alan Bennett is the 1539th most famous English and ranks 8th in famous people born in Leeds, England, UK.

In general, Alan Bennett ranks as the 16890th most popular famous person, and the 293rd most popular author / writer / novelist / playwright of all time. “The Famous Birthdays” catalogs over 40,000 famous people, everyone, from actors to actresses to singers to tiktok stars, from serial killers to chefs to scientists to youtubers and more. If you're curious to see who was born on your birthday, you can use our database to find out who, what, where, when and why. You can search by birthday, birthplace, claim to fame or any other information by typing in the search box, or simply browse our site by selecting the month, the day, the horoscope, or any other clickable option.