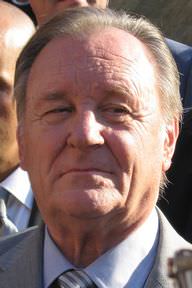 Albert Uderzo was a French cartoonist and scripter who specialized in the creation of comic books. His claim to fame was being one of the co-creators and main illustrators of a long-standing comic book series known as “Asterix”.

His parents were named Silvio and Iria Uderzo. He had two older siblings named Bruno and Rina Uderzo. He has another brother called Marcel who is likewise a cartoonist.

In 1953 he married a lady named Ada Milani, and in 1956 they birthed a daughter by the name of Sylvie Uderzo.

His first name is derived from a child his mother gave birth to prior to him that survived for less than a year. His middle name is in honor of his paternal grandfather.

He was diagnosed as being color blind at a young age.

Although he died at an old age in France during the coronavirus epidemic, his death was not related to that sickness but rather due to a heart attack.

Albert's birthday is in 210 days

How old was Albert when he died?

Albert Uderzo would be 95 years old if he was alive today.

Where was Albert from?

He was born in Fismes, France.