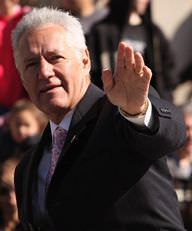 Alex Trebek was a revered Canadian-American TV personality. One of his most-renowned works on TV is him serving as the host of the popular game show named, "Jeopardy!" .

In addition to that, the ace TV host will also be remembered for hosting other notable TV game shows such as “Double Dare”, “Battlestars”, and “The Wizard of Odds”.

To add to his fame as a renowned game show host, Trebek was also famous for his acting roles in TV series including the crime drama series, “The X-Files”. He also appeared on the 1998 comedy film entitled, “Mafia!”.

He holds a Guinness World Record for "the most gameshow episodes hosted by the same presenter (same program)". As of 2014, he had hosted over 6,800 episodes of "Jeopardy".

He has a star on the Hollywood Walk of Fame. He he won the prestigious 'Daytime Emmy Award' for "Outstanding Game Show Host" on 7 different occasions.

His dad, George Trebek was a Ukrainian immigrant to the U.S. and his mum, Lucille Lagacé was a French-Canadian.

The TV icon was married twice – his first marriage, in 1974, was to a businesswoman named, Elaine Trebek, which ended in a divorce in 1981. He adopted Elaine’s daughter named Nicky.

His second marriage was in 1990, to Jean Currivan, who worked in the real estate industry. Their relationship brought forth children namely Emily and Mathew.

Trebek’s educational background comprises a high school education at Sudbury Secondary School in Greater Sudburry and a college education at University of Ottawa. In the latter institution, he completed a degree course in philosophy in the year 1961.

His death, which happened in November 2020, was linked to his prolonged struggle with pancreatic cancer.

The ace TV star became a citizen of the U.S. after he naturalized in the year 1998.

I did everything - I did newscasts, I did sports, I did dramas.Alex Trebek

If you can't be in awe of Mother Nature, there's something wrong with you.Alex Trebek

Learning something new is fun.Alex Trebek

Alex's birthday is in 229 days

How old was Alex when he died?

Alex Trebek would be 81 years old if he was alive today.

Where was Alex from?

He was born in Sudbury, Ontario, Canada.

Alex Trebek was a famous Canadian-American TV personality, who was born on July 22, 1940. As a person born on this date, Alex Trebek is listed in our database as the 18th most popular celebrity for the day (July 22) and the 25th most popular for the year (1940).

People born on July 22 fall under the Zodiac sign of Cancer, the Crab. Alex Trebek is the 587th most popular Cancer.

Aside from information specific to Alex Trebek's birthday, Alex Trebek is the 13th most famous Canadian-American and ranks 1st in famous people born in Sudbury, Ontario, Canada.

In general, Alex Trebek ranks as the 6789th most popular famous person, and the 28th most popular tv host / presenter of all time. “The Famous Birthdays” catalogs over 40,000 famous people, everyone, from actors to actresses to singers to tiktok stars, from serial killers to chefs to scientists to youtubers and more. If you're curious to see who was born on your birthday, you can use our database to find out who, what, where, when and why. You can search by birthday, birthplace, claim to fame or any other information by typing in the search box, or simply browse our site by selecting the month, the day, the horoscope, or any other clickable option.