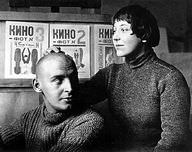 Alexander Rodchenko was a Russian painter known to be one of the founders of the constructivism art movement. In 1915, he produced his first art work which was heavily influenced by Kazimir Malevich. He gained global attention in 1921 when he made "The End of Painting" declaration. During that period, he displayed three monochromatic canvases which paved the way for a new era in the Russian art industry.

Admired for his versatility, Rodchenko was also into photography and photomontage. His unique picture angles differentiated him from his counterparts.

He was married to Varvara Stepanova.

He was initially trained by Georgii Medvedev and Nicolai Fechin.

American artist Barbara Kruger has mentioned him as one of her influences.

Emperor of Austria, King of Hungary

Alexander Rodchenko's birthday is on December 5, 1891.

Alexander's birthday is in 62 days

How old was Alexander when he died?

Alexander Rodchenko would be 130 years old if he was alive today.

Where was Alexander from?

He was born in St. Petersburg.