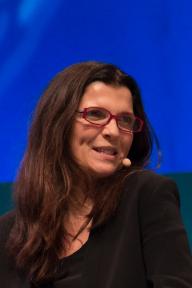 She is an Irish activist and businesswoman, who is popularly known for being the wife of popular musician, Paul Hewson – who is noted for being a pivotal member of the rock band, "U2".

During the 1990s, Ali Hewson is known to have played an active role as an anti-nuclear activist. She was privileged to partake in several aid missions to high-radiation zones in Belarus.

Her parents are father, Terry Stewart who was an electrical worker and mother, Joy Stewart – a housewife. She is noted to have a brother named Ian Stewart.

She got married to Paul in 1982. Her children are John, singer – Elijah Hewson, activist and entrepreneur – Jordan Hewson and actress – Eve Hewson.

She received a "Special Tribute Award" from Council of Fashion Designers of America in 2007.

In 2008, entertainment.ie named her "Sexiest Celebrity Other Half".

In 1989, she received a degree in politics and sociology from University College, Dublin.

She met Paul Hewson at age 12.

Where is Ali from?

She was born in Dublin, Ireland.

Ali Hewson is a famous Irish activist and businesswoman, who was born on March 23, 1961. As a person born on this date, Ali Hewson is listed in our database as the 115th most popular celebrity for the day (March 23) and the 352nd most popular for the year (1961).

People born on March 23 fall under the Zodiac sign of Aries, the Ram. Ali Hewson is the 2956th most popular Aries.

Aside from information specific to Ali Hewson's birthday, Ali Hewson is the 273rd most famous Irish and ranks 52nd in famous people born in Dublin, Ireland.

In general, Ali Hewson ranks as the 37911th most popular famous person, and the 138th most popular activist / civil rights leader of all time. “The Famous Birthdays” catalogs over 40,000 famous people, everyone, from actors to actresses to singers to tiktok stars, from serial killers to chefs to scientists to youtubers and more. If you're curious to see who was born on your birthday, you can use our database to find out who, what, where, when and why. You can search by birthday, birthplace, claim to fame or any other information by typing in the search box, or simply browse our site by selecting the month, the day, the horoscope, or any other clickable option.