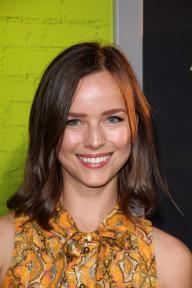 She began her acting career in the theatre where she performed with Tallahassee's Young Actors Theatre squad. Her debut on-screen acting started off in 2004 when she happened to emerge amongst the eight finalists picked to take up the role of Laurie in the reality show, "In Search of the New Partridge Family".

She was born to father, John Miller, who was a former newspaper publisher. Her mother is Margo Miller. She got married to American actor, Adam Nee in 2012 – a marriage which soon ended in 2019.

She plays the piano and guitar.

She is fluent in French, Spanish and English.

Allison Miller's birthday is on September 2, 1985.

Allison's birthday is in 216 days

Where is Allison from?

She was born in Rome, Italy.

People born on September 2 fall under the Zodiac sign of Virgo, the Virgin. Allison Miller is the 2910th most popular Virgo.

Aside from information specific to Allison Miller's birthday, Allison Miller is the 22nd most famous Italian-American and ranks 71st in famous people born in Rome, Italy.

In general, Allison Miller ranks as the 33764th most popular famous person, and the 3478th most popular actress of all time. “The Famous Birthdays” catalogs over 40,000 famous people, everyone, from actors to actresses to singers to tiktok stars, from serial killers to chefs to scientists to youtubers and more. If you're curious to see who was born on your birthday, you can use our database to find out who, what, where, when and why. You can search by birthday, birthplace, claim to fame or any other information by typing in the search box, or simply browse our site by selecting the month, the day, the horoscope, or any other clickable option.