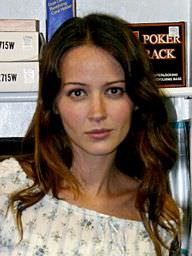 Amy Acker became a global celebrity after portraying the Illyria and Winifred Burkle characters in the action television series named “Angel”. Her other movie credits include “Alias” and “Person of Interest”.

She spent her childhood moments with her father, who worked as an attorney, and her mum. She tied the knot with James Carpinello, an actor, in 2003. By the end of 2006, the couple were blessed with two children, a daughter and a son.

As a child, she performed as a dancer and was mainly trained in modern dance and ballet.

She has recorded more than 190,000 followers on Instagram where she operates under the username “theamyacker”.

Title
Amy Acker and James Carpinello at the premiere of Serenity in 2005.
Author
Raven Underwood
Source
http://commons.wikimedia.org/wiki/File:Amy_Acker,_James_Carpinello.jpg
License
CC BY 2.0

Amy's birthday is in 60 days