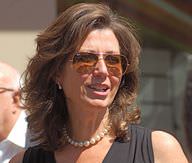 Amy Lee Grant is a singer, songwriter and author. Having made her debut in 1976, she performed in the contemporary Christian music genre before she also became known for her pop songs in the 1980s and 1990s. The crossover made her one of the first and few Christian music performers to enjoy mainstream success on the Billboard charts. She has scored commercially successful hits such as “Baby Baby”, “The Next Time I Fall” and “Angels”.

She was raised in Augusta, Georgia, for the first six years of her life. She later moved to Nashville, Tennessee, with her family. She has three elder sisters.

She is the ex-wife of Christian singer, Gary Chapman. They were married for seventeen years and finalized their divorce in June 1999. They have three children together. Grant has one more child from her marriage to country singer Vince Gill.

She has been the recipient of more than five Grammy Awards and 20 Dove Awards.

She wrote “Mosaic: Pieces of My Life So Far”, her autobiography.

She was born in Augusta, Georgia, U.S..