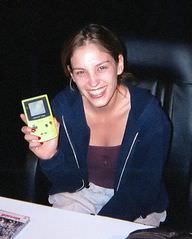 Amy Jo Johnson is an American actress, singer and a former gymnast. She is best known for her role as the Pink Ranger in "Mighty Morphin Power Rangers". She has also released 3 solo albums as a singer/songwriter and she has directed and produced 2 short films, "Bent" and "Lines".

She was born in Massachusetts in 1970. She quit gymnastics to pursue an acting career at the age of 17.

She is married to Olivier Giner and she has a daughter.

Where is Amy Jo Johnson from?

She was born in Cape Cod, Massachusetts, U.S..