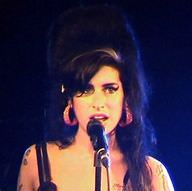 Amy Winehouse was an English singer and songwriter. She released 3 studio albums (1 posthumous one).

She is regarded as one of the greatest soul and jazz singers of all time. She has been a major influence on many artists, such as Florence Welch, Estelle, Lana Del Rey, Adam Levine, Jay Z, Beyonce, Paloma Faith and John Legend.

She was born in London in 1983. Many of her uncles were jazz musicians. She was married to Blake Fielder-Civil for 2 years and she had dated Alex Clare, Reg Traviss and Josh Bowman in the past. She died of alcohol poisoning in 2011 at the age of 27.

She is a member of the "27 Club", which refers to a number of musicians who died at the age of 27. Other members are Janis Joplin, Jimi Hendrix, Jim Morrison and Kurt Cobain.

How old was Amy when she died?

Amy Winehouse would be 39 years old if she was alive today.

Where was Amy from?