Andrew Cunanan battled with alcoholism and drugs when he was around 28 years old at the same time he began his murder crimes. Cunanan’s first victim was Jeffrey Trail, a close friend he shared an apartment with. He went on to murder Trail’s partner, David Madson six days later.

The California-born serial killer gained notoriety after killing popular American real estate dealer Lee Miglin in May 1997. He also made the headlines after he shot and killed Gianni Versace, a renowned fashion designer from Italy.

He was raised by his parents Mary Anne Schillaci and Modesto Cunanan.

He started his education at Bonita Vista Middle School, and continued at The Bishop's School. In 1987, he started reading American history at the University of California, San Diego.

The American committed suicide by firing a bullet into his head.

Cunanan recorded a mark of 147 in an IQ test he took in high school.

Reports have suggested that his love for expensive things and riches might be the motive behind his infamous actions.

American entertainer, Darren Criss portrayed his character in the 2018 film entitled “The Assassination of Gianni Versace”. 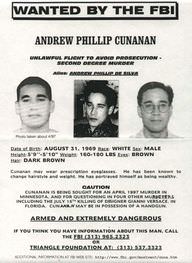 Title
Andrew Cunanan's FBI photos when he was placed on the Ten Most Wanted Fugitives list.
Author
Unknown

Andrew's birthday is in 329 days

How old was Andrew when he died?

Andrew Cunanan would be 53 years old if he was alive today.

Where was Andrew from?

He was born in National City, California, U.S..