Andrew Lincoln is an English TV, stage and film actor. He is best known for his role in the TV series "The Walking Dead".

He has been nominated for 3 Saturn Awards (1 win) and a Bafta.

He was born in London in 1973. He studied at the Royal Academy of Dramatic Arts. He is married and he has 2 children. The daughter of Gwyneth Paltrow and Chris Martin, Apple Martin, was the flower girl at their wedding! 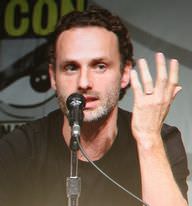 Andrew's birthday is in 70 days

Where is Andrew from?