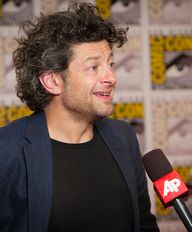 Andy Serkis is an English actor and director. He is best known for playing Gollum in”The Lord of the Rings” trilogy.

Andy is called “The Godfather of Motion Capture”. He was the voice and movement for “King Kong” in the 2005 release. There is wide debate over the skill involved in being a motion capture actor. Many protests were held over Serkis not being nominated for an Academy Award for Best Supporting Actor in “The Lord of the Rings” trilogy. In 2016, Andy will be directing a much anticipated adaptation of George Orwell’s “Animal Farm”.

In 2002, Andy married wife Lorraine. They have 3 children and reside in London, England.

Andy’s mother was a teacher and his father was a gynecologist.

Andy's birthday is in 205 days

Where is Andy from?

He was born in Ruislip Manor, London, England, UK.