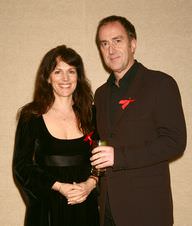 Angus Deayton is a well-known British actor, novelist, singer, comedian, and television and radio personality who rose to prominence as the host of the TV program "Have I Got News for You" and the comedy show "Would I Lie to You?".

His one-of-a-kind presenting abilities aided the aforementioned shows in reaching their pinnacle.

With a career spanning more than four decades, He began as a radio host and worked at BBC Radio 4 from 1981 to 1987, after which he then transferred to television. After that, he moved on to writing and eventually performing.

His talents as an actor landed him roles in movie productions such as "One Foot in the Grave," "Doctor at the Top," "Nighty Night," "Death in Paradise," and "Waterloo Road." He's also acted in and written for television series. Deayton is a multi-talented novelist who has written books like “The Uncyclopaedia of Rock”.

He was born to Susan Deayton, and Roger Davall Deayton.

He has a child called Isaac Deayton.

He had a brief stint as a soccer player with Crystal Palace.

He is an avid fan of Manchester United.

He majored in German and French.

Angus' birthday is in 98 days

Where is Angus from?

He was born in Surrey, England, UK.