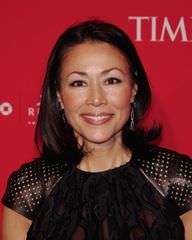 She is a seasoned American journalist who is noted to have made waves in the reporting scene for more than three decades, focusing on natural disasters and human suffering in war.

Ann Curry has played a frontline role in several countries, including; Iraq, Lebanon, Syria, Afghanistan, Congo, Israel, and more. Disasters are not left out of her resumé as she covered the Haiti earthquake in 2010 and the Southeast Asian tsunami.

In 1997, she landed herself a role as Today's news anchor. She anchored with Dateline NBC between 2005 and 2011. Curry took a bow from NBC News in 2015 and soon launched her own multimedia platform.

Her father, Robert Curry was a naval sailor. Her mother is Hiroe Nagase. She is noted to have four siblings. She married a software executive, Brian Ross in 1989. Her children include; William and McKenzie Curry.

She received the "Excellence in Morning Programming" at the 2007 Daytime Emmy Awards.

Curry was awarded "Outstanding Coverage of a Breaking News Story in a News Magazine" at the 2010 Emmy Awards.

She earned the "Outstanding Continuing Coverage of a News Story in a News Magazine" at the Emmy Awards in 2011.

She also earned a nomination for the "Favorite Daytime TV Host" at the 2012 People's Choice Awards.

She received a bachelor's degree in journalism from University of Oregon in 1978.

Curry is known to have a "sweet tooth".

Beauty doesn't matter because in the end, we all lose our looks and all we have is our heart.Ann Curry

I think eventually I want to become a teacher, like my father wanted to be, and hopefully positively influence the next generation.Ann Curry

People close to me called me 'Curry in a Hurry.' I was moving through life at 100 miles an hour trying to further my career and be a great mom and make everyone happy.Ann Curry

Women have demanded and gotten better jobs and more power. But the one thing we deserve is a better relationship with ourselves.Ann Curry

Ann Curry is a famous American journalist, who was born on November 19, 1956. As a person born on this date, Ann Curry is listed in our database as the 81st most popular celebrity for the day (November 19) and the 236th most popular for the year (1956).

People born on November 19 fall under the Zodiac sign of Scorpio, the Scorpion. Ann Curry is the 2496th most popular Scorpio.

Aside from information specific to Ann Curry's birthday, Ann Curry is the 16084th most famous American.

In general, Ann Curry ranks as the 33152nd most popular famous person, and the 235th most popular journalist of all time. “The Famous Birthdays” catalogs over 25,000 famous people, everyone, from actors to actresses to singers to tiktok stars, from serial killers to chefs to scientists to youtubers and more. If you're curious to see who was born on your birthday, you can use our database to find out who, what, where, when and why. You can search by birthday, birthplace, claim to fame or any other information by typing in the search box, or simply browse our site by selecting the month, the day, the horoscope, or any other clickable option.