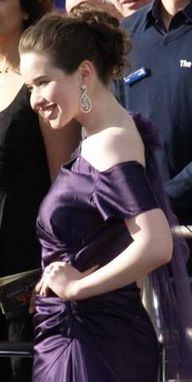 She was born to Andrew Popplewell, who is noted for serving as a High Judge. Her mother, Debra Lomas is a dermatologist. Her siblings include Freddie and Lulu Popplewell. She got married to Sam Caird in 2016.

She received the awards for "Best Actress" and “Best Performance in Cast” at the 2006 Character and Morality in Entertainment Awards.

Popplewell earned herself a nomination for the "Best Female Performance: Drama" at the 2012 Streamy Awards.

She got nominated for the award of "Best Movie Choice Actress" at the 2006 Teen Choice Awards.

Anna's birthday is in 91 days

People born on December 16 fall under the Zodiac sign of Sagittarius, the Archer. Anna Popplewell is the 822nd most popular Sagittarius.

Aside from information specific to Anna Popplewell's birthday, Anna Popplewell is the 939th most famous English and ranks 161st in famous people born in London, England, UK.

In general, Anna Popplewell ranks as the 11017th most popular famous person, and the 1333rd most popular actress of all time. “The Famous Birthdays” catalogs over 40,000 famous people, everyone, from actors to actresses to singers to tiktok stars, from serial killers to chefs to scientists to youtubers and more. If you're curious to see who was born on your birthday, you can use our database to find out who, what, where, when and why. You can search by birthday, birthplace, claim to fame or any other information by typing in the search box, or simply browse our site by selecting the month, the day, the horoscope, or any other clickable option.