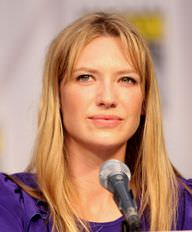 Anna Torv is an Australian actress who first gained recognition appearing in a number of plays, including 2001's Plenty, where she played the character Susan Traherne. She went on to gain international stardom starring on the hit TV series Fringe, where she portrayed the character Olivia Dunham. Her other notable television series work include The Secret Life of UsandMistresses.

In 2008, she got married to actor Mark Valley, who starred with her on Fringe. The marriage ended the following year without producing any children.

Over the years, BuddyTV has included her in their list of "TV's 100 Sexiest Women" multiple times.

She became estranged from her father when she was only 8 years old.

Anna's birthday is in 255 days

She was born in Melbourne, Victoria, Australia.