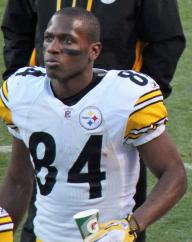 He is an American football player, who is widely noted for playing in the wide receiver position. His interest for football came along quite early in his life. This zeal fueled him to begin participating in track and football while attending Miami Norland High School.

During his time in Central Michigan University, he played college football, which earned him massive attention and accolades. Between his rookie playing career in Pittsburgh Steelers (2010 - 2018), Brown was able to gather more receptions than any player during his time in the league.

His father is retired American footballer, Eddie Brown. His mother is Adrianne Moss. He is known to have a brother named Desmond Brown. He is noted to have been married to Chelsie Kyriss. His children include; Autonomy, Ali, Apollo, Antanyiah, and Antonio Brown Jr.

He won the "NFL receiving touchdowns leader" in 2018.

Antonio's birthday is in 288 days

Where is Antonio from?

People born on July 10 fall under the Zodiac sign of Cancer, the Crab. Antonio Brown is the 1st most popular Cancer.

Aside from information specific to Antonio Brown's birthday, Antonio Brown is the 2nd most famous American and ranks 1st in famous people born in Miami, Florida, U.S.

In general, Antonio Brown ranks as the 3rd most popular famous person, and the 1st most popular footballer of all time. “The Famous Birthdays” catalogs over 40,000 famous people, everyone, from actors to actresses to singers to tiktok stars, from serial killers to chefs to scientists to youtubers and more. If you're curious to see who was born on your birthday, you can use our database to find out who, what, where, when and why. You can search by birthday, birthplace, claim to fame or any other information by typing in the search box, or simply browse our site by selecting the month, the day, the horoscope, or any other clickable option.