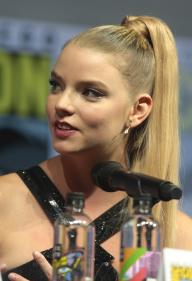 Anya Josephine M. Taylor-Joy is a notable English-Argentine actress known for her portrayal of characters such as Casey Cooke in the horror film, Split (2016), Thomasin in The Witch (2015) and Lily in comedy thriller, Thoroughbreds (2018).

Anya was born to a Scottish-Argentine father who was formerly an international banker, and an African-Spanish mother who has worked as a photographer and interior designer. She grew up with five other siblings. Their names are, however, yet to be revealed to the general public.

She was the recipient of the Cannes Film Festival’s Trophée Chopard in 2017.

In 2017, she earned a nomination for a BAFTA Rising Star Award at the British Academy Film Awards.

At the 2016 Gotham Independent Film Awards, she won the Breakthrough Actor award.

In 2017, she won the Best Actress Award at the Fangoria Chainsaw Awards, the Best Female Newcomer award at the Empire Awards and the Best Performance by a Younger Actor at the Saturn Awards.

Anya is skilled at playing the ukulele and the electric guitar.

She has received training in ballet dancing.

She has cited British actor, Eddie Redmayne as her cinematic crush.

People born on April 16 fall under the Zodiac sign of Aries, the Ram. Anya Taylor-Joy is the 1097th most popular Aries.

Aside from information specific to Anya Taylor-Joy's birthday, Anya Taylor-Joy is the 1129th most famous English and ranks 53rd in famous people born in Miami, Florida, U.S.

In general, Anya Taylor-Joy ranks as the 12814th most popular famous person, and the 1619th most popular actress of all time. “The Famous Birthdays” catalogs over 25,000 famous people, everyone, from actors to actresses to singers to tiktok stars, from serial killers to chefs to scientists to youtubers and more. If you're curious to see who was born on your birthday, you can use our database to find out who, what, where, when and why. You can search by birthday, birthplace, claim to fame or any other information by typing in the search box, or simply browse our site by selecting the month, the day, the horoscope, or any other clickable option.