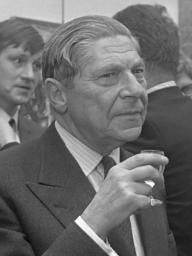 Arthur Koestler started his writing career in the early 1930s. During the early stages of his profession, he wrote about the Soviet Five-Year Plan which was not published.

While the Spanish Civil War was ongoing, he worked with London’s News Chronicle as a war reporter. He became a global icon after launching his 1940 novel titled “Darkness at Noon”. The Hungarian-British journalist and author went on publish many books with some named “Thieves in the Night” and “Arrival and Departure”.

His parents were Adele Jeiteles and Henrik Koestler. In 1965, he married Cynthia Jefferies. Prior to their union, he had married and divorced Dorothy Ascher, and Mamaine Paget.

He became a Commander of the Order of the British Empire in 1972. The renowned writer was the recipient of the Sonning Prize in 1968.

He resigned from the Communist Party of Germany in 1938.

Koestler was said to be suffering from Parkinson's disease in 1976.

Arthur Koestler's birthday is on September 5, 1905.

Arthur's birthday is in 26 days

How old was Arthur when he died?

Arthur Koestler would be 116 years old if he was alive today.

Where was Arthur from?

He was born in Budapest, Hungary.