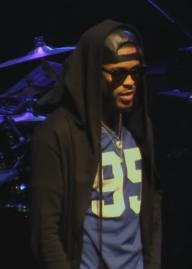 August Anthony Alsina Jr., known professionally as August Alsina, is an American singer – he is usually associated with the Alternative R&B genre. He was signed by Def Jam Records in 2011. He became known after the release of his 2013 single, I Luv This Shit, featuring rapper, Trinidad James.

His mother moved from his birth town of New Orleans to Houston with him after the 2005 Hurricane Katrina. Both parents were cocaine addicts.

His elder brother, Melvin La’Branch III, was shot dead in 2010. His elder sister, Chandra, died in December 2018 after a battle with cancer and left him with three nieces to care for.

The BET Best New Artist Award in 2014 went to Alsina. He also earned a nomination for Best Male R&B/Pop Artist for the same ceremony.

His single, I Luv this Shit, won the Coca-Cola Viewers’ Choice Award and earned a nomination for Best Collaboration at the 2014 BET Awards.

Alsina revealed to his fans in 2015 in an Instagram post that he had to undergo surgery for a degenerative eye disease.

In June 2020, the singer made headlines after claiming, in an interview with radio personality, Angela Yee that he had a romantic affair with Jada Pinkett Smith. He went ahead to suggest that Will Smith, who has been married to Jada since 1997, had given him the green light to go into the relationship with Jada.

August's birthday is in 16 days

Where is August from?