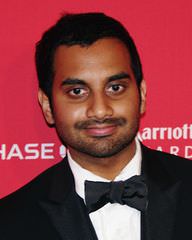 Aziz Ansari is an American actor and a stand-up comedian famous for playing the character Tom Haverford on NBC's hit seriesParks and Recreation from 2009 to 2015. He is also known for creating, writing and starring as Dev Shah on the Netflix series Master of None. His popular film credits include Funny People, Get Him to the Greek and 30 Minutes or Less. In 2015, he published his first book Modern Romance: An Investigation.

He is the son of Fatima and Shoukath Ansari. He has a brother named Aniz.

He won a Variety Power of Comedy Award and a Critics' Choice Television Award for Best Comedy Series in 2014 and 2016 respectively.

In 2011, he appeared in the music video of the Jay-Z and Kanye West's song Otis. 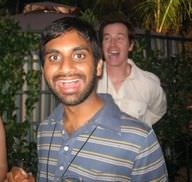 Do It Under the Influence Yourself! That's what we're shooting for! Get drunk and make your dreams come true.Aziz Ansari

Every time I've done comedy in, like, traditional comedy clubs, there's always these comedians that do really well with audiences but that the other comedians hate because they're just, you know, doing kind of cheap stuff like dancing around or doing, like, very kind of base sex humor a lot, and stuff like that.Aziz Ansari

When I tour, it's like, well, like a food tour as much as a comedy tour. I try to eat at all the weird places, the obscure barbecue joints, burger places. There are a few spots in L.A. that I'm obsessed with - one of them is the Taco Zone taco truck on Alvarado. There are secret off-menu items that are amazing.Aziz Ansari

Aziz's birthday is in 233 days

Where is Aziz from?

He was born in Columbia, South Carolina, U.S..