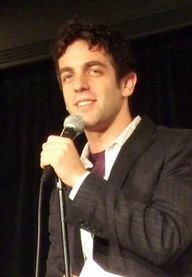 About B. J. Novak

B. J. Novak is an American actor, screenwriter, stand-up comedian and author who first gained recognition appearing on MTV's Punk'd. He later went on to gain worldwide stardom writing and producing the hit television comedy series The Office, in which he also portrayed the character Ryan Howard. His notable film credits include 2009's Inglorious Basterds, 2013's Saving Mr. Banks and 2014's The Amazing Spider-Man 2.

He was born to Linda and renowned author William Novak. He grew up with two younger brothers: Lev and Jesse.

For his work on The Office, he won a Writers Guild of America Award and two Screen Actors Guild Awards.

He attended Harvard University, where he majored in Spanish and English literature.

His father William Novak ghostwrote memoirs for a number of prominent figures, including Magic Johnson and Nancy Reagan.

He was born in Newton, Massachusetts, U.S..