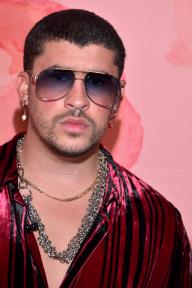 Bad Bunny is a Puerto Rican music producer, singer, and rapper. He mostly does reggaeton and Latin trap music. Some of his songs include “Soy Peor”, “Tu No Vive Asi”, and “Pa Ti”.

His rise to fame came in 2016 after he released his hit single, “Diles”. Since then, he’s worked on different projects and has collaborated with renowned artists like Drake, Cardi B, and Becky G.

In 2018, he won the Song of Summer accolade at the MTV Video Music Awards. That same year, he also received the Artist of the Year and Favorite Song – Urban prizes at the “Latin American Music Awards”.

He picked up the Top Latin Song of the Year, as well as, Top Rap Song prizes at the Billboard Music Awards in 2019.

His album “X 100pre” was adjudged the Best Urban Music Album at the 2019 Latin Grammy Awards.

Bad Bunny's birthday is in 36 days

Where is Bad Bunny from?

He was born in Almirante Sur, Puerto Rico.