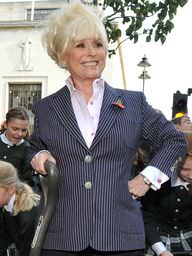 Legendary English actress, Barbara Windsor gained fame as a star of the popular TV soap opera titled, “EastEnders”. She appeared in more than 1600 episodes, playing the character of Peggy Mitchell. She will also be remembered for her appearances alongside Joan Sims, Kenneth Connor, and Sid James on the popular “Carry On” film series.

Her film debut came in 1954 in the British comedy film entitled, “The Belles of St. Trinian’s”.

Windsor was also known for her involvement in several animation films including 2010’s “Alice in Wonderland” – she provided the voice for the character Mallymkun.

The actress got married to her first husband, Ronnie Knight, in March of 1964. After her divorce to Knight in January, 1985, she tied the knot with a chef named, Stephen Hollings. Their marriage ended in a divorce in 1995. Her third marriage was to Scott Mitchell, which happened in April, 2000. She remained with Mitchell until her death.

She was born as an only child to John Deeks, who worked as a costard, and Rose Ellis, a dressmaker.

Windsor passed away after battling Alzheimer's disease – she was initially diagnosed with the illness in 2014. After her death, tributes rolled in from a number of well-wishers all over the world including her “EastEnders” co-stars, Patsy Palmer and Adam Woodyatt.

In May of 2017, she became an inductee of the “Hackney Empire Walk Of Fame”. She was honored with the “British Soap Award” on two occasions, in 1999 and 2009. She received an honorary degree, in 2014, from University of East London.

Her birth name was Barbara Ann Deeks. She began using her stage moniker, Barbara Windsor, in 1953, after being inspired by the coronation of Queen Elizabeth II, the previous year.

The soap star was a friend to the late singer and songwriter, Amy Winehouse.

She started acting from the age of 13.

She made her first appearance on “EastEnders” in 1994. She continued to appear on the series until 2016, when her character, Mallymkun was killed off. The said character was originally played by the late English actress, Jo Warne.

Her autobiography titled, “All of Me” was released in 2000.

Barbara's birthday is in 358 days

How old was Barbara when she died?

Barbara Windsor would be 85 years old if she was alive today.

Where was Barbara from?