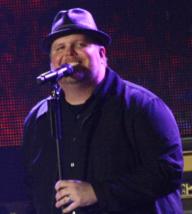 Bart Millard is a highly-talented American songwriter and singer who became a popular figure due to his association with the band known as MercyMe. As a member the band, he has been influential in recording a number of the ensemble’s hit singles such as "Bless Me Indeed (Jabez's Song)", "Bring the Rain", and "Have Yourself a Merry Little Christmas".

He also helped them to release lots of studio albums which include “Almost There”, “Undone”, and “Welcome to the New”.

As a solo artiste, Millard released his first album in 2005 and titled it “Hymned, No. 1”. Three years later, he dropped his second album titled “Hymned Again”.

As of June 2020, he’s known to have five children with a lady called Shannon. His children are named Sam, Sophie, Charlie, Gracie, and Miles.

In 2005, he was named the “Best Male Vocalist” by the Christianity Today Magazine.

Bart's birthday is in 66 days

Where is Bart from?

He was born in Greenville, Texas, U.S..

People born on December 1 fall under the Zodiac sign of Sagittarius, the Archer. Bart Millard is the 2076th most popular Sagittarius.

Aside from information specific to Bart Millard's birthday, Bart Millard is the 15636th most famous American.

In general, Bart Millard ranks as the 28912th most popular famous person, and the 193rd most popular songwriter / composer of all time. “The Famous Birthdays” catalogs over 40,000 famous people, everyone, from actors to actresses to singers to tiktok stars, from serial killers to chefs to scientists to youtubers and more. If you're curious to see who was born on your birthday, you can use our database to find out who, what, where, when and why. You can search by birthday, birthplace, claim to fame or any other information by typing in the search box, or simply browse our site by selecting the month, the day, the horoscope, or any other clickable option.