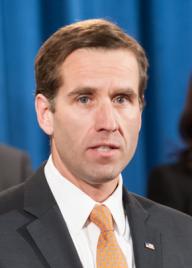 Beau Biden was an American lawyer who practiced this profession not only politically but also on behalf of the US Army. His true claim to fame was being the first-born son of Joe Biden, one of the greatest politicians in American history. His father was sworn in as the 46th president of the U.S. on January 20, 2021.

His mother was Joe Biden’s first wife, Neilia Biden, who passed away in 1972.

He had two full-blood siblings in his younger brother Hunter Biden and younger sister, the late Naomi Biden. He also had a younger half-sister named Ashley Biden.

He was a graduate of the University of Pennsylvania and there participated in a fraternity called Psi Upsilon.

He graduated from law school, specifically the Syracuse University College of Law.

He received the Bronze Star Medal for time he spent in Iraq on behalf of the US Military during 2009.

Biden served as the Attorney General of Delaware from 2007 to 2015.

He also served as a member of the Delaware National Guard, being awarded the Legion of Merit posthumously by the organization.

He died as a result of developing brain cancer during the later years of his life.

He had been employed by the US Department of Justice as well as the Army Judge Advocate General’s Corps.

His funeral was attended by many of the biggest politicians in America at the time, including President Barack Obama.

When he was just a small child, he was involved in the car accident which claimed the lives of his mother and sister.

He was known to be a fan of Coldplay, with Chris Martin performing at his funeral.

Beau's birthday is in 100 days

How old was Beau when he died?

Beau Biden would be 52 years old if he was alive today.

Where was Beau from?

He was born in Wilmington, Delaware, U.S..

Beau Biden was a famous American politician and son of Joe Biden, who was born on February 3, 1969. As a person born on this date, Beau Biden is listed in our database as the 8th most popular celebrity for the day (February 3) and the 62nd most popular for the year (1969).

People born on February 3 fall under the Zodiac sign of Aquarius, the Water Bearer. Beau Biden is the 439th most popular Aquarius.

Aside from information specific to Beau Biden's birthday, Beau Biden is the 3674th most famous American and ranks 4th in famous people born in Wilmington, Delaware, U.S.

In general, Beau Biden ranks as the 5698th most popular famous person, and the 43rd most popular politician of all time. “The Famous Birthdays” catalogs over 40,000 famous people, everyone, from actors to actresses to singers to tiktok stars, from serial killers to chefs to scientists to youtubers and more. If you're curious to see who was born on your birthday, you can use our database to find out who, what, where, when and why. You can search by birthday, birthplace, claim to fame or any other information by typing in the search box, or simply browse our site by selecting the month, the day, the horoscope, or any other clickable option.