Elizabeth is a former South African-British gymnast, whose career is colored by several medals. She represented Britain in a number of international competitions. She officially kicked off her career in 2001 when she competed in the World Championships held in Belgium. She goes into the history books as the first ever British female gymnast to clinch a medal at the Olympic Games, European Championships, and the World Championships.

Her parents are Jerry and Ann Tweddle. Her brother is James Tweddle.

Twaddle picked up a Bronze medal at the 2012 Summer Olympic Games.

She attended The Queen's School, Chester, and later studied at the University of Liverpool. She later received a degree in Sports Science from Liverpool John Moores University in 2017.

She announced her retirement in 2013. 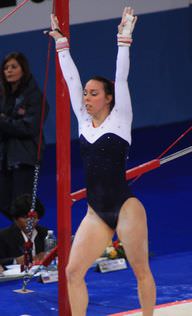 Title
Elizabeth Tweddle at the 17th Internationaux de France in 2010, during the qualifications of uneven bars.
Author
TwoWings
Source
http://commons.wikimedia.org/wiki/File:Tweddle-Paris.JPG
License
CC BY 3.0

Beth Tweddle's birthday is in 189 days

Where is Beth Tweddle from?

She was born in Johannesburg, South Africa.

What is Beth Tweddle's height?

People born on April 1 fall under the Zodiac sign of Aries, the Ram. Beth Tweddle is the 1053rd most popular Aries.

Aside from information specific to Beth Tweddle's birthday, Beth Tweddle is the 1232nd most famous English and ranks 9th in famous people born in Johannesburg, South Africa.

In general, Beth Tweddle ranks as the 13929th most popular famous person of all time. “The Famous Birthdays” catalogs over 40,000 famous people, everyone, from actors to actresses to singers to tiktok stars, from serial killers to chefs to scientists to youtubers and more. If you're curious to see who was born on your birthday, you can use our database to find out who, what, where, when and why. You can search by birthday, birthplace, claim to fame or any other information by typing in the search box, or simply browse our site by selecting the month, the day, the horoscope, or any other clickable option.