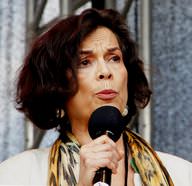 Bianca Jagger is a Nicaraguan-British human rights advocate who first gained international stardom as an actress and for her marriage to the Rolling Stones frontman Mick Jagger. She is also known for being the founder of the Bianca Jagger Human Rights Foundation and for serving as a Goodwill Ambassador for the Council of Europe.

She married Mick Jagger in 1971. The marriage produced her only child, a daughter named Jade Jagger. The marriage ended in 1978 as a result of Jagger's extramarital affair with Jerry Hall.

According to her, the reason she never married again after her divorce from Mick Jagger was because she could not go through another divorce.

She almost lost her life in El Salvador in 1981 while rescuing the lives of a group of refugees who had been captured by an armed death squad. She said that incident totally changed her life.

Bianca's birthday is in 88 days

Where is Bianca from?

She was born in Managua, Nicaragua.