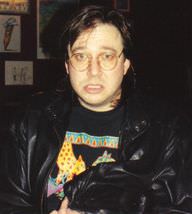 Bill Hicks was an American stand-up comedian widely regarded as one of the best comedians of his time. He was ranked number six on Channel 4's 2007 list of the 100 Greatest Stand-Up Comics. In 2010, he rose to the number four position of that same list. Outside of comedy, he was also an established musician who released his first album Dangerous in 1990. He died at the age of 32.

He was the son of James Melvin Hicks and Mary Reese Hicks. He had two older siblings named Lynn and Steve. He was engaged to his manager Colleen McGarr before his death.

Two of his albums Arizona Bay and Rant in E-Minor were both released after his death.

Children are smarter than any of us. Know how I know that? I don't know one child with a full time job and children.Bill Hicks

I left in love, in laughter, and in truth, and wherever truth, love and laughter abide, I am there in spirit.Bill Hicks

If you don't think drugs have done good things for us, then take all of your records, tapes and CD's and burn them.Bill Hicks

It's always funny until someone gets hurt. Then it's just hilarious.Bill Hicks

Life is only a dream and we are the imagination of ourselves.Bill Hicks

Music is a great energizer. It's a language everybody knows.Bill Hicks

We all pay for life with death, so everything in between should be free.Bill Hicks

Bill's birthday is in 163 days

How old was Bill when he died?

Bill Hicks would be 60 years old if he was alive today.

Where was Bill from?

He was born in Valdosta, Georgia, U.S..