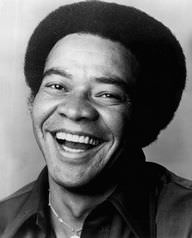 Bill Withers was an American singer-songwriter. He recorded 8 studio albums during his illustrious musical career. His first album entitled, "Just as I Am" was released in 1971 and the following year, he dropped another album titled, "Still Bill".

Withers is regarded as one of the most important r'n'b singers of all-time.

Throughout his career, Withers had been nominated 7 times for a Grammy Award and he won 3 of them. The first one in 1971 for his biggest hit to date, "Ain't No Sunshine".

Withers was married twice including Denise Nicholas, whom he was married to from  1973 to 1974. He got married to Marcia Johnson in 1976 and birthed two children, Kori and Todd, with her.

He worked as an assembler for several different companies. When he debuted the song "Ain't No Sunshine", he refused to resign his job!

In 1974, Withers performed in a show alongside other top musicians like James Brown and Etta James.

Bill Withers was a famous American singer-songwriter, who was born on July 4, 1938. As a person born on this date, Bill Withers is listed in our database as the 24th most popular celebrity for the day (July 4) and the 22nd most popular for the year (1938).

People born on July 4 fall under the Zodiac sign of Cancer, the Crab. Bill Withers is the 927th most popular Cancer.

Aside from information specific to Bill Withers' birthday, Bill Withers is the 6153rd most famous American.

In general, Bill Withers ranks as the 9866th most popular famous person, and the 1006th most popular singer of all time. “The Famous Birthdays” catalogs over 25,000 famous people, everyone, from actors to actresses to singers to tiktok stars, from serial killers to chefs to scientists to youtubers and more. If you're curious to see who was born on your birthday, you can use our database to find out who, what, where, when and why. You can search by birthday, birthplace, claim to fame or any other information by typing in the search box, or simply browse our site by selecting the month, the day, the horoscope, or any other clickable option.