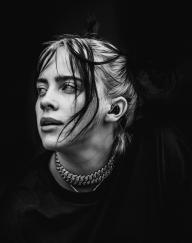 Her mother, Maggie Baird, is a professional actress, screenwriter, and musician. And her elder brother by four years, Finneas O’Connell, is also a prominent musician and her regular collaborator.

Her first album debuted at number 1 on the Billboard 200.

She was named Billboard Woman of the Year in 2019.

She set a couple of Guinness World Records in 2020. One was for being the youngest lady ever to lead the UK albums chart, and the other was for, once again as a female, having the most simultaneous entries on the Hot 100.

She was named both Choice Female Artist and Choice Breakout Artist at the 2019 Teen Choice Awards.

She released her debut song, “Ocean Eyes” when she was 13-year old.  And that track was penned and produced by her brother, Finneas.

She suffers from Tourette Syndrome.

She was homeschooled throughout her entire childhood.

Billie Eilish grew up a vegetarian and in 2014 became a vegan.

She holds the record of being the first singer born in the 2000s to release an album, which went on to top the Billboard 200.

She worked with the Mayor of Los Angeles, Eric Garcetti, in 2018 to encourage her peers to register to vote.

She became a member of the Los Angeles Children’s Choir when she was eight-years-old.

Billie Eilish's birthday is in 211 days

Where is Billie Eilish from?

People born on December 18 fall under the Zodiac sign of Sagittarius, the Archer. Billie Eilish is the 4th most popular Sagittarius.

Aside from information specific to Billie Eilish's birthday, Billie Eilish is the 15th most famous American and ranks 1st in famous people born in Los Angeles, California, U.S.

In general, Billie Eilish ranks as the 30th most popular famous person, and the 7th most popular singer of all time. “The Famous Birthdays” catalogs over 40,000 famous people, everyone, from actors to actresses to singers to tiktok stars, from serial killers to chefs to scientists to youtubers and more. If you're curious to see who was born on your birthday, you can use our database to find out who, what, where, when and why. You can search by birthday, birthplace, claim to fame or any other information by typing in the search box, or simply browse our site by selecting the month, the day, the horoscope, or any other clickable option.