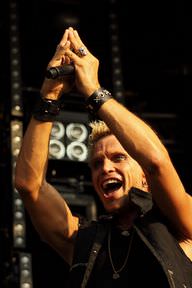 British singer, actor, and songwriter, Billy Idol, is famous for his association with the English punk rock group named, “Generation X” from 1976 to 1981.

His parents, Joan Broad and Bill Broad named him, William Michael Albert Broad. Jane is the name of his younger sister.

He and former partner, Perri Lister welcomed a son named Willem Wolf Broad in June 1988. A year later, he and Linda Mathis had a daughter who’s identified as Bonnie Blue.

His song titled, “Cradle of Love" won him the “Best Video from a Film” at the MTV Video Music Awards in 1990.

He received a nomination for the “Best Male Rock Vocal Performance” for his song, titled, “To Be a Lover” at the Grammy Awards in 1987.

His height is around 5 feet 9 inches.

He holds dual nationality in the United States and the United Kingdom.

Where is Billy Idol from?

He was born in Stanmore, Middlesex, England, UK.