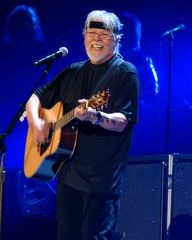 Bob Seger is an American musician who rose to popularity after he formed the Silver Bullet Band and released the live album ‘Live’ Bullet in 1976. Although he was already known locally in his home state, the album would launch him to national recognition. The album, which was recorded at the Cobo Hall in Detroit, featured songs like "Nutbush City Limits", "Turn the Page", and “Get out of Denver".

Although Seger had already released eight albums prior, it would only be until his ninth studio album in 1976 that he would finally reach mainstream success. The album, titled Night Moves, featured the singles “Night Moves”, “Mainstreet”, and “Rock and Roll Never Forgets". Seger followed the hit album with two more similarly acclaimed albums, Stranger in Town (1978) and Against the Wind (1980), which produced songs like "Still the Same", "Old Time Rock and Roll", “Fire Lake", and "You'll Accomp'ny Me".

Where is Bob from?

He was born in Dearborn, Michigan, U.S..