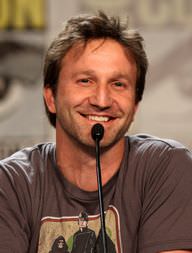 Breckin Meyer is an American actor, comedian and writer whose famous film roles include Jon Arbuckle in 2004's Garfield: The Movie and its 2006 sequel, 1995's Clueless and 1996's Escape from L.A. As a writer, he earned an Emmy Award nomination for writing Robot Chicken: Star Wars, which is an episode on the television comedy series Robot Chicken.

He and film director Deborah Kaplan tied the knot in 2001. The marriage produced two daughters.

He is also a professional drummer who has played the drums for a number of bands.

According to iconic actress Drew Barrymore, he was the one who gave her the first kiss she ever had.

While in high school, he reportedly slept in a coffin for several years.

Breckin Meyer's birthday is in 215 days

Where is Breckin Meyer from?

He was born in Minneapolis, Minnesota, U.S..