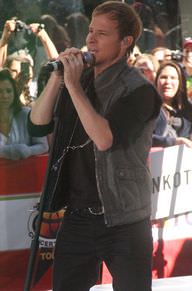 He is an American singer, songwriter and actor, who is most notable for his membership with the American vocal group, "Backstreet Boys". He is also prominent for being a contemporary Christian music artist.

His parents are father, Harold Littrel Jr., and mother, Jacqueline Fox, who was a secretary. He is noted to have a brother named Harold Littrell III.

He got married to American actress, producer and model, Leighanne Wallace. He is the father of American sensational singer, songwriter and actor, Baylee Littrell.

He became an inductee of the Kentucky Music Hall of Fame in 2015.

He and his "Backstreet Boys" band members got nominated for the "Best New Artist" at the 1999 Grammy Awards.

He loves sports and has played under the Babe Ruth League and Little League.

I really believe that's one of the many reasons that God had put me right in the middle of the Backstreet Boys. There are so many stars today that don't realize the impact they have on young people. Being a superstar is great, as long as you can be a positive role model.Brian Littrell

I've received a lot of positive feedback from both the secular and Christian markets. People seem to be receiving it with open arms and hearts, and are interested in the stories I want to share about my relationship with God and my faith.Brian Littrell

People born on February 20 fall under the Zodiac sign of Pisces, the Fish. Brian Littrell is the 1744th most popular Pisces.

Aside from information specific to Brian Littrell's birthday, Brian Littrell is the 12212th most famous American and ranks 14th in famous people born in Lexington, Kentucky, U.S.

In general, Brian Littrell ranks as the 21500th most popular famous person, and the 2220th most popular singer of all time. “The Famous Birthdays” catalogs over 25,000 famous people, everyone, from actors to actresses to singers to tiktok stars, from serial killers to chefs to scientists to youtubers and more. If you're curious to see who was born on your birthday, you can use our database to find out who, what, where, when and why. You can search by birthday, birthplace, claim to fame or any other information by typing in the search box, or simply browse our site by selecting the month, the day, the horoscope, or any other clickable option.