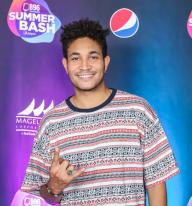 His father, Brad Johnson, was a restaurateur and his mother Tracey Ross was an actress.

His 2019 single “La La Land”, featuring YG, was certified Gold by the RIAA, while his 2018 single, “Drew Barrymore” received a Platinum certification.

He auditioned for The Glee Project in 2011 and was enlisted as one of the twelve finalists; however, he became the first to be evicted from the show.

He signed a record deal with producer Nolan Lambroza and released his first EP, titled “Lazy Fair” in April 2014.

He quit studying at Berklee College of Music to release his first EP.

He has cited being musically influenced by “Third Eye Blind” and rapper, J.Cole.

Bryce Vine is a famous American singer and rapper, who was born on June 16, 1988. As a person born on this date, Bryce Vine is listed in our database as the 52nd most popular celebrity for the day (June 16) and the 286th most popular for the year (1988).

People born on June 16 fall under the Zodiac sign of Gemini, the Twins. Bryce Vine is the 1501st most popular Gemini.

Aside from information specific to Bryce Vine's birthday, Bryce Vine is the 8997th most famous American and ranks 384th in famous people born in New York City, New York, U.S.

In general, Bryce Vine ranks as the 15377th most popular famous person, and the 522nd most popular rapper of all time. “The Famous Birthdays” catalogs over 25,000 famous people, everyone, from actors to actresses to singers to tiktok stars, from serial killers to chefs to scientists to youtubers and more. If you're curious to see who was born on your birthday, you can use our database to find out who, what, where, when and why. You can search by birthday, birthplace, claim to fame or any other information by typing in the search box, or simply browse our site by selecting the month, the day, the horoscope, or any other clickable option.