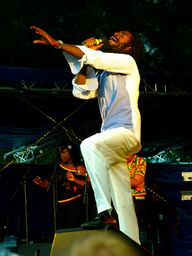 Mark Anthony Myrie is the birth name of famous Jamaican reggae and dancehall artist Buju Banton. He is undoubtedly a highly celebrated figure in reggae and Jamaican music. As of 2020, he had released 11 studio albums.

Buju Banton grew up in Barbican Road, Kingston, Jamaica. His mother nicknamed him Buju when he was young. Banton, in the Jamaican language, translates as a good storyteller. However, he adopted the name as a tribute and respect for his childhood idol, “deejay Burro Banton.”

In 1992, his album “Mr. Mention” became the highest-selling album in Jamaican music history. Buju also broke Bob Markey’s record with the most number 1 songs in Jamaica in the same year.

In 2010, his album, “Before the Dawn,” earned him the Grammy Award for Best Reggae Album.

In 2011, Buju was imprisoned in the USA for being guilty of drug-related and criminal charges. However, he was released in late 2018 and deported to his native country Jamaica.

Many human-rights activists criticized his 1992 song, “Boom Bye Bye” for its lyrical content because it seemed to encourage the abuse of gay men. However, in 2019, Buju deleted the song from his catalog on all streaming platforms.

Buju Banton's birthday is in 12 days

Where is Buju Banton from?

He was born in Kingston, Jamaica.

People born on July 15 fall under the Zodiac sign of Cancer, the Crab. Buju Banton is the 1714th most popular Cancer.

Aside from information specific to Buju Banton's birthday, Buju Banton is the 27th most famous Jamaican and ranks 11th in famous people born in Kingston, Jamaica.

In general, Buju Banton ranks as the 17096th most popular famous person, and the 1844th most popular singer of all time. “The Famous Birthdays” catalogs over 40,000 famous people, everyone, from actors to actresses to singers to tiktok stars, from serial killers to chefs to scientists to youtubers and more. If you're curious to see who was born on your birthday, you can use our database to find out who, what, where, when and why. You can search by birthday, birthplace, claim to fame or any other information by typing in the search box, or simply browse our site by selecting the month, the day, the horoscope, or any other clickable option.