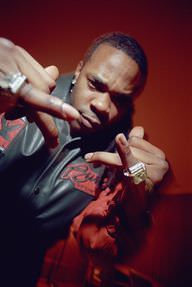 Busta Rhymes is an American musician and hip-hop artist. He was given the name Busta by the musician Chuck D of the group Public Enemy,

In 1996, Busta released “The Coming” which went platinum and verified his status as a legitimate hip-hop artist. He has released 8 albums in total. In 2011, Busta was signed with Cash Money Records. In 2001, his top single was “Break Ya Neck”. In 2015, “Twerkit” was released on the album “Welcome to 2003”.

Busta Rhymes was born Trevor Smith Jr. Busta has said he relies on his Muslim faith to keep him straight. He has 4 children.

Busta Rhymes' birthday is in 174 days

Where is Busta Rhymes from?