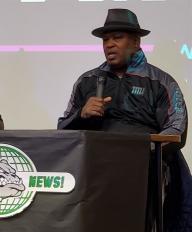 He is best remembered for what many consider to be one of the biggest upsets in the history of professional sports: beating Mike Tyson in 1990 to become the undisputed world heavyweight champion.

Douglas went into the fight as an underdog who had won 30 out of 35 matches.

His real name is James Douglas. His father, William Douglas also pursued a career as a professional boxer. He was raised in Columbus, Ohio.

He reigned for eight months as the undisputed world heavyweight champion.

After losing his heavyweight titles to Evander Holyfield in October 1990, he retired. He returned to the sport in 1996 and finally retired three years later.

Buster Douglas' birthday is in 185 days

Where is Buster Douglas from?

What is Buster Douglas' height?