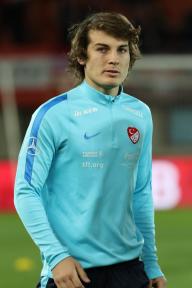 The footballer lived most of his formative years in Turkey and was raised by Ömer Söyüncü.

Söyüncü was first chosen to play amateur football with Menemen Belediyespor from 2006 to 2011 and went on to play for Bucaspor from 2011 to 2013. The defender finally joined Gümüşorduspor in 2013 and played with the club until he was called to play professionally in 2014.

Söyüncü made his professional debut in 2014 and played for Altınordu. He played with the team till 2016 and then left to join German side SC Freiburg from 2016 to 2018.

His impressive displays on the field caught the attention of English football club Leicester City. In 2018, Söyüncü was signed by Leicester and went on to become one of their best performers.

The defender also plays for the Turkish national team as of 2021. He made his first international debut for his country in 2016.

Fans dubbed him "Lord Farquaad" because of his popularity and striking similarity to the character in the film "Shrek."

Çağlar's birthday is in 229 days

Where is Çağlar from?

He was born in Izmir, Turkey.