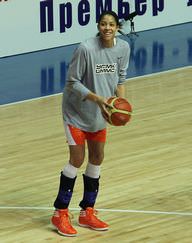 Parker is one of the greatest American female basketball players of all-time. She began her National Basketball Association career in 2008 with the Los Angeles Sparks. From there, her unique skills and versatility on the basketball court has led her to play for other women’s basketball teams like UMMC Ekaterinburg, Xinjiang Tianshan Deers, and Chicago Sky.

She won a gold medal for the United States at the 2008 and 2012 Olympic Games in Beijing and London respectively.

She won the Honda Sports Award during her time in college.

After announcing her retirement, she began working as a sports analyst for CBS Sports.

Candace's birthday is in 135 days

Where is Candace from?

What is Candace Parker's height?