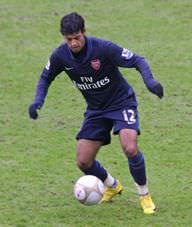 Mexican professional player, Carlos Vela, is best known for his affiliation with the American soccer team, Los Angeles FC, which he joined in 2018.

He was born to parents, Nella Garrido and Enrique Vela. Professional footballer, Manuel Alejandro Vela Garrido is his elder brother. He and his girlfriend, named, Saioa Cañibano welcomed their son, Romeo in November 2016.

He was the recipient of the MLS MVP Award in 2019.

He alongside Kaká and Landon Donovan were featured on the cover of the FIFA 11 video game.

He was suspended by the Mexican Football Federation for six months in September 2010.

In addition to football, Vela also loves to play basketball, which is one of his preferred sport.

Carlos' birthday is in 130 days

Where is Carlos from?

He was born in Cancún, Quintana Roo, Mexico.

What is Carlos Vela's height?

People born on March 1 fall under the Zodiac sign of Pisces, the Fish. Carlos Vela is the 1830th most popular Pisces.

Aside from information specific to Carlos Vela's birthday, Carlos Vela is the 163rd most famous Mexican.

In general, Carlos Vela ranks as the 23473rd most popular famous person, and the 727th most popular soccer player of all time. “The Famous Birthdays” catalogs over 40,000 famous people, everyone, from actors to actresses to singers to tiktok stars, from serial killers to chefs to scientists to youtubers and more. If you're curious to see who was born on your birthday, you can use our database to find out who, what, where, when and why. You can search by birthday, birthplace, claim to fame or any other information by typing in the search box, or simply browse our site by selecting the month, the day, the horoscope, or any other clickable option.