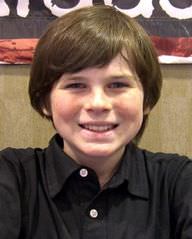 Chandler Riggs is an American actor most popularly known for his appearances in the wildly successful zombie-infested horror drama TV series The Walking Dead, playing as Carl Grimes, who is the son of the show’s main protagonist Rick Grimes (played by actor Andrew Lincoln). His portrayal of the character bagged him a Saturn Award in 2013 and a Young Artist Award in 2014.

Prior to his breakout role in The Walking Dead, Riggs started his acting career in a theater production of The Wizard of Oz, and then getting cast in the 2009 drama film Get Low and in 2010’s The Wronged Man.

Chandler's birthday is in 205 days

Where is Chandler from?