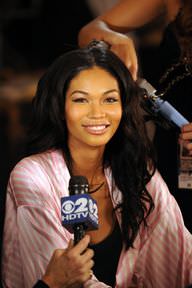 She is an American model, largely known for her work with top brands including Victoria's Secret. Chanel Iman was ranked amongst the top 30 models of the 2000s by Vogue Paris. Her modeling career was birthed from a tender age as she began as a child model under Ford Models.

In 2006, Iman participated at Ford's "Supermodel of the World" contest where she earned the third place. Due to her successful modeling career, she brags of having modeled for top fashion brands such as Balenciaga, Gucci, Dolce & Gabbana, Versace, Michael Kors, Dior, Tommy Hilfiger, Louis Vuitton and many more.

Her father is the renowned American college basketball coach, Tic Price while her mother is China Robinson. She got married to American football player, Sterling Shepard in 2018. She was in a romantic relationship with American rapper, A$AP Rocky between 2013 and 2014. Her children are namely Cali and Cassie Shepard.

Iman was nominated for the "Outstanding Breakthrough Performance, Female" for the work, "Dope" (2015) at the 2016 Black Reel Awards.

She picked up a nomination for the "Choice Model" at the 2016 Teen Choice Awards.

She plays the Piano.

She began modeling at age 12. However, she would have become a chef if not modeling.

Chanel's birthday is in 107 days

Where is Chanel from?

She was born in Atlanta, Georgia, U.S..

What is Chanel Iman's height?