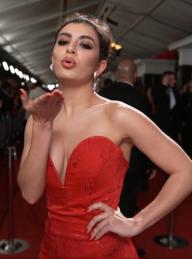 Charlotte Aitchison is a British singer and songwriter. She began writing songs at the age of fourteen, and in 2008, she started posting songs on 'Myspace'.

She caught the attention of a promoter who later invited her for shows where she had the opportunity to perform at warehouse raves and parties.

Charlotte rose to prominence in 2013 when she collaborated with 'Icona Pop' on a song entitled, 'I Love It' which made waves.

She has a father, a Scottish, called Jon Aitchison, who was an entrepreneur and former show-booker. Her mother, Shameera, a Gujarati Indian, was a nurse and also a former flight attendant.

She was nominated for two Grammy Awards in 2015.

She won the 'Hit Maker of the Year' at the Billboard Women in Music Awards held in 2014.

She is a music video director.

She singlehandedly released her debut album in 2008.

She dropped out of Slade School of Fine Art during her second year.

She began recording her first album on a loan.

She has co-written songs for artists like; Selena Gomez, Iggy Azalea, and Shawn Mendes.

Her mother is from Africa.

Charli XCX's birthday is in 195 days

Where is Charli XCX from?

She was born in Cambridge, England, UK.

People born on August 2 fall under the Zodiac sign of Leo, the Lion. Charli XCX is the 364th most popular Leo.

Aside from information specific to Charli XCX's birthday, Charli XCX is the 281st most famous English and ranks 4th in famous people born in Cambridge, England, UK.

In general, Charli XCX ranks as the 3544th most popular famous person, and the 362nd most popular singer of all time. “The Famous Birthdays” catalogs over 40,000 famous people, everyone, from actors to actresses to singers to tiktok stars, from serial killers to chefs to scientists to youtubers and more. If you're curious to see who was born on your birthday, you can use our database to find out who, what, where, when and why. You can search by birthday, birthplace, claim to fame or any other information by typing in the search box, or simply browse our site by selecting the month, the day, the horoscope, or any other clickable option.